The statue stood at the north entrance to Kyle Field until August 18, 2014 when it was relocated to the west-side of Rudder Fountain as part of the Kyle Field renovation.
View photos of the E. King Gill Statue relocation.

The official Class of ’80 Rededication Ceremony was held on October 24, 2016 as part of our 35th Reunion.
Read more about the 12th Man Statue Rededication.

The tradition of the Twelfth Man was born on January 2, 1922, when the Aggies took the field against Centre College, then the nation’s top ranked college football team, in the Dixie Classic (now the Cotton Bowl). The Aggies fought hard and kept the game close, but as the game wore on, the strength and power of Centre was literally taking its toll.  The first half produced so many injuries for A&M that Coach D. X. Bible feared he wouldn’t have enough men to finish the game, so, he called into the Aggie section of the stands for E. King Gill, a reserve who had left football after the regular season to play basketball. Gill, who was spotting players for reporters at the time and was not in football uniform, willingly volunteered and donned the uniform of injured player Heine Weir.  Gill stood ready throughout the rest of the game and when it ended with an A&M victory, 22–14, E. King Gill was the only man left standing on the sidelines for the Aggies. 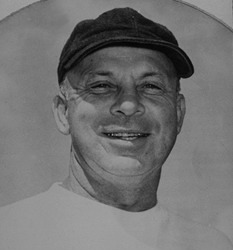 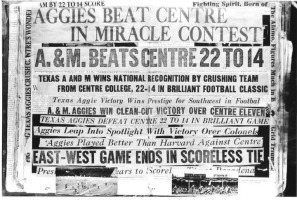 The great symbolism of Gill coming out of the stands to stand alongside his Aggie team struck a chord with the Texas A&M faithful. Just like that, the 12th Man legend was born. “I wish I could say that I went in and ran for the winning touchdown, but I did not,” Gill said afterward. “I simply stood by in case my team needed me.”  That spirit of readiness for service, desire to support, and enthusiasm helped kindle a flame of devotion among the entire student body; a spirit that has grown vigorously throughout the years. Since that game, Aggies have stood at football games to symbolize their unity with the team as its “Twelfth Man”.  The 12th Man is always in the stands waiting to be called upon if they are needed.